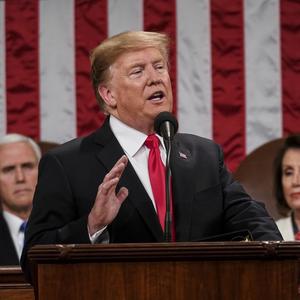 “
The agenda I will lay out this evening is not a Republican agenda or a Democrat agenda. It is the agenda of the American people.
President Donald Trump

In the President’s State of the Union (SOTU) Address on February 5, Trump began strong. He stated that our nation has unlimited potential and we need to work as one nation instead of two divided parties.

However, the message didn’t stay positive. Later in the address, Trump began speaking to the recent change in New York’s late-term abortion laws. Essentially, the bill allows a doctor to perform an abortion up to birth.

“
These are living, feeling, beautiful babies who will never get the chance to share their love and dreams with the world.
President Donald Trump

An abortion is considered late-term after the twentieth week of gestation. At this point, the baby may not be able to live outside the uterus, but it has developed a heartbeat, fingers and toes, and some hair.

The procedure is possibly the most gruesome part. Abortions performed after 20 weeks typically involve something call “Dilation and Evacuation.” This procedure involves actual dismemberment of the fetus. Occasionally, doctors will perform a lethal injection into the fetuses’ beating, living heart. In Utah, lawmakers require anesthesia be administered to the baby before the procedure. And while the baby may not be able to feel pain until about 27 weeks, it’s able to kick the instruments away – which does happen.

Let’s dive a little deeper into the primary reason why this bill was passed. If a prenatal test is performed and the fetus is found to not be viable outside the womb or the pregnancy/birth will negatively affect the mother’s life or health, then an abortion can be performed. This seems reasonable on paper. We don’t want babies to suffer.

But there’s another side to this. While late-term abortions may be a rare procedure with only 1.3% of them being done after 21 weeks, digging into the details shows a little too much leeway on what’s considered dangerous for the mother’s health.

So, what’s considered a negative health affect? Well, if the mother’s life is at stake, then I can understand the necessity of this procedure. But what many don’t realize is that the mother’s mental health is considered in this decision. Ignoring prenatal depression for just a second, what happens if a mother feels defeated after an argument with the father of her child? What if this mother decides the way to get even is to abort the father’s baby? Well, that’s not only happened before, but it’s happened more than once. And that is what I cannot accept. That is evil. It’s murdering a child because you’re mad at someone else. Because you want to punish the person you claim to love.

But that’s just one aspect of the mental health of a mother. Prenatal depression has been said to be the worst type of depression a woman can get. It involves moments of extreme panic. Most importantly, it involves moments where the mother doesn’t want to continue the pregnancy. And in New York, that would be a perfectly rational reason to abort a fetus post 21 weeks.

Just let that sink in.

The politicians who applauded this decision are pure evil. They applaud the murder of children. “My body, my choice,” is the phrase most of these women utter when confronted with this issue. But let me just ask one question.

What about the baby’s body?

Fraga, J. (August 29, 2016). Prenatal depression may be the most severe form of maternal depression. Retrieved from https://www.washingtonpost.com/news/to-your-health/wp/2016/08/29/prenatal-depression-may-be-the-most-severe-form-of-maternal-depression/

If you're looking for political commentary, book reviews, and men's rights, you've come to the right place! I encourage you to like, comment and share any of these posts. Also, please let me know if there's something you'd like to see me analyze. Happy reading!